It’s been awhile since I’ve written something. This doesn’t have anything to do with weight loss but I wanted to share it as you’ve been so supportive along the way. I would say that I’m a fairly honest person. Some would say too honest. But I’m writing this today because I am hoping to start the healing process one word at a time. This time a few of weeks ago I found out that I was pregnant. I had taken my third at home pregnancy test in a matter of seven days and it was finally positive. 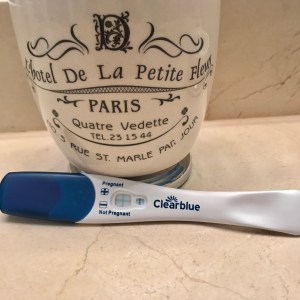 I thought about how I was going to tell my husband but decided that I couldn’t wait until we were on vacation later on that week so I just ended up bringing my pregnancy stick down to his office and said “guess what?” Not an elaborate reveal but a brief moment of shared excitement of things to come. We were leaving for Arizona a couple of days later so I went into my doctor’s office the next day to get a blood test to confirm the good news. I found out that I was a little over 5 weeks pregnant based on my last menstrual period. It felt so real.

The next day on our way to the airport I received a phone call from the nurse saying that my hormone levels were 200 which was on the lower side (normal hormone levels for 5 weeks are 20-7000, pretty wide range right?) but they were in the normal range so nothing to get worried about. She asked me to get tested again when I came back from our vacation. We were in Arizona for a handful of days and while it was a great trip I’m not going to lie I was a nervous wreck. I cried through dinner once and kept googling symptoms every five minutes. But towards the end of the trip I started to feel less anxiety and I wasn’t having any weird symptoms so I headed back to Chicago hopeful.

I went in for another blood test when I got home and went about the rest of my Monday looking forward to getting the results the next day. The nurse called me first thing in the morning with a very different tone to her voice. She told me that in almost an entire week my hormone level only doubled once. No longer in the normal hormonal range she suspected that I was either having an ectopic pregnancy that could require surgery to remove or I would eventually have a miscarriage. After the ringing in my ears stopped I heard her say that she wanted me to come in one more time to get blood work done. I wish I could tell you that my numbers miraculously doubled or even tripled but that wasn’t the case. I would need to come back in for an ultrasound to confirm what they already knew – that this wasn’t a viable pregnancy and I wasn’t going to be someone’s mommy this time around.

I went in for the ultrasound and saw a sad and empty sac in my uterus. Based on what they saw and what they didn’t see they’re pretty sure my pregnancy stopped progressing around 4 weeks. I started thinking back to when I took those first few pregnancy tests and how it wasn’t until a week later that I got a positive result. Just pregnant enough to show up but not go the distance.

After the ultrasound and what seemed like an eternity waiting by myself in a private room the doctor came in. She explained to me that since my hormone levels were already tapering off the next step would be for them to start declining and at that point I would have a miscarriage. I don’t know if I can fully explain what it feels like to know that something bad is going to happen to your body but that you don’t exactly know when and where it will decide to start. Would it start while I was working in someone’s closet? Or would it happen while I was working out? Would it happen while I was sleeping next to my husband? Or would he be out of town while it happened? Well it ended up being a combination of all the above and for added measure I got to experience the tail end at the Lady Gaga concert. It was still a great concert.

After a long weekend waiting for the results of my latest blood test hoping that my hormone levels were going down so an ectopic pregnancy could be ruled out I found out this morning that my numbers have already dropped significantly and by next week I should be at zero and will be in the clear to try again. I’m a little scared but I’m not going to let that stop me.

These last few weeks have been a roller coaster of emotions. I got to be pregnant and know I was pregnant for such a short time. And in the blink of an eye it was over. It’s weird that the biggest heartbreak you can ever imagine doesn’t actually kill you. It knocks the wind out of you. It leaves you breathless. And it leaves you weak. But surprisingly it doesn’t actually kill you.

In telling this story I’m realizing it’s a shared one. I told you I’m honest. I told my closest friends when I found out that this pregnancy wasn’t going to end with a baby and sure enough a lot of them had experienced the same loss and in some cases experienced it more than once. Women are for sure the stronger sex. Who else would knowingly go through all of this to start a family?

I am praying that I will have good news down the road to share with you. I am hopeful that there will be a baby in our future. Thank you for all of your support and well wishes.