One pound at a time

I gave myself a goal in August 2015 that in the next year I would lose 100 pounds. After consulting with a doctor I decided to give up pretty much everything I was eating. That included staying away from dairy, bread, pasta, and sugar (even fruit). This may sound crazy but I was actually looking forward to such a restrictive diet after having indulged for so many years. Being honest about my food restrictions helped my husband, family, and friends to know that if they wanted to make plans with me involving food, they had to be mindful about the restaurants we would be going to or at least be understanding when I couldn’t share dishes with them that fell outside my dietary restrictions. Besides staying away from certain foods I was being challenged to find new things to eat at home, restaurants I frequented, and since so much of my day is in flux I needed easy and healthy options for on the go.

I also needed to start going out of my comfort zone regarding my workouts. Even in my heaviest I was a die hard Shredder – going to Shred415 Monday, Wednesday, and Friday was by far my most favorite ritual (for those of you that haven’t taken a class you should know it’s addictive). I gave myself a workout challenge of adding one extra workout during the week as well as one on the weekend. Around that same time my husband and I decided to join our local Chicago Athletic Club just blocks from our home.  Besides being close to the gym an added bonus was that the membership we chose allowed us to go to four different locations making it even easier to stick with a routine regardless of where I was in the city.

I love the variety of group fitness classes that are offered through CAC’s schedule. I started slowly by adding a fun Hip-Hop class and a more challenging Spinning class. I should mention that I really didn’t have a lot of experience with Spinning. A friend invited me to go with her years ago and the only thing I took away from the experience was a sore vagina (yep you read that correctly). But last year another friend (hey Ali Fyfe!) asked me to be on her team for a charity cycling event through Equinox known as Cycle for Survival. I was so excited to be a part of a team and help raise money for such a wonderful organization that I said yes and had a blast. So when looking at class options I figured I would give spinning another go. 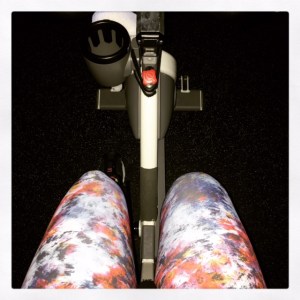 After a few weeks I ended up spinning just as much as I was shredding and realized that the extra workouts were starting to pay off. I think during that first month between dieting and working out five times a week I lost close to 30 pounds. Seeing that overall loss on the scale was a big wake up call to me that I could actually do this. Little did I know that things were just getting started. Until next time!